These 3 values drive everything that I do:

Ok, so here goes. Let’s start with now and work our way back.

ZipMessage has been my full-time focus since the beginning of 2021. I was able to build a simple version within 3 months and begin inviting first customers in April. So far, the response and early traction has been very exciting!

Of all the products I’ve made so far, ZipMessage is probably my personal favorite, as a user. I’m all about “async” communication with my team, customers, and advisors, and ZipMessage is designed to make async video conversations productive and zero-friction. You should try it!

In recent months, I sold nearly all of my other products: In September 2021, I sold my productized service busienss, Audience Ops, which I ran for almost 7 years (blog post here). In January 2022, I sold my SaaS business, ProcessKit (blog post here). In February 2022 I sold my course & media brand, Productize. I also sold off a few smaller software tools, SunriseKPI and Thready. All of these exits were good outcomes for all involved and for me, a nice way to officially conclude those chapters in my journey.

My podcast and Twitter are where I’m sharing most of my real-time updates, ideas, and interests. My DMs are open! 👋

I’m trying to spend more time on hobbies this year, like cycling and riffing on my guitars.

Here’s what I was focused on in previous years…

This was the year I sold and exited from Audience Ops (full story here).

I also started ZipMessage in January, 2021 and it had a hell of a first year, seeing fast traction. I also took funding for ZipMessage from Calm Fund in September 2021, which marked the first time I took outside investment for any of my businesses, to date.

ProcessKit remained running and supporting its customer-base throughout 2021. And my Productize course continued to resonate with consultants and agency folks, despite me not focusing my time/energy on teaching and speaking much in this area anymore.

Amid the global pandemic, 2020 wasn’t all bad. It had it’s high points as well as some dissapointments. I summed up my year in review in this Tweet thread.

In 2020 I was mainly focused on ProcessKit. It was its 2nd year giving it my full-time focus, and first full year of customer growth. My developer and I shipped a ton of features this year and the product really came into its own. I also worked on starting up some marketing flywheels.

Audience Ops and Productize both continued to do their thing with minimal involvement from me. Except on Productize, I gave it’s site a refresh and released a couple of new guides which were well received.

Although I had hacked on early prototypes the year prior, January 2019 was when I started building ProcessKit full-time. By June 2019 it was ready to bring on the first paying customers.

Building ProcessKit accellerated my learning as a full stack developer quite a bit. It was also a chance to flex my customer development muscles. I must have done over 100 customer calls in 2019.

Meanwhile, Audience Ops and Productize continued to chug along. I didn’t do much on these businesses, except for Audience Ops, where I experimented with delegating the role of sales for a little while.

At the start of 2018, I decided to shut down my SaaS product, Ops Calendar. It wasn’t gaining traction, plus I ran into lots of technical walls.

That motivated me to spend the rest of 2018 learning full stack development, with the goal of building and launching my own ideas for software products. After 10 months of full-time learning, I was able to ship my first SaaS product! That was SunriseKPI.

While building up my Ruby on Rails skills, I also began planning and plotting my next SaaS, ProcessKit.

Meanwhile, Audience Ops and Productize continued to chug along with my day-to-day involvement kept to a minimum. The one new thing at Audience Ops in 2018 was our done-with-you podcasting service.

As an unexpected bonus in 2018, I received interest from the team at iThemes/Liquid Web to acquire our pair of premium WordPress plugins—Content Upgrades and Landing Pages. That was a relatively small deal that went through easily.

In 2017, I spent most of my time trying to grow Ops Calendar, a SaaS product that was a cross between an editorial calendar and process management tool. Aside from early customer development, I was doing the front-end design and dev. I outsourced the back-end development and worked with that team most days this year.

Meanwhile, Audience Ops and Productize continued to chug along with my day-to-day involvement kept to a minimum.

I also maintained with an outsourced developer our set of premium WordPress plugins—Content Upgrades and Landing Pages—which we used in Audience Ops and offered for sale as small digital products.

In 2016, Audience Ops was in it’s 2nd year, and still growing at a steady, rapid pace. I grew the team there and removed myself from more of the day-to-day management.

Later in this year I began taking the processes and learnings from Audience Ops and form the early concepts for a SaaS product, Ops Calendar. It would be a cross between an editorial calendar and process management tool. In 2016, I put together a pitch deck, then used pre-sales to validate early interest in the idea. With about 14 pre-sales made, I felt confident to proceed with hiring developers to build the back-end for the product. That’s where most of my time and focus went in 2016.

Also in 2016, we finished up our cross-country family nomad trip, gave birth to our 2nd daughter, and moved into our home in Connecticut.

2015 was quite a turning point in my career. Here’s what happened in roughly this order:

I continued to write and speak regularly on topics related to productized services, systems, hiring, and scaling a service.

In most of 2014, I was focused on growing and optimizing Restaurant Engine–primarily through systematic blog content and SEO. I also delegated every role in running this business, from sales, to support, to tech.

In late 2014, I created and launched the Productize course. It was very well received by my audience.

I spent a lot of time writing and speak regularly on topics related to productized services, systems, hiring, and scaling a service, which resonated a lot with my small, but growing audience of freelancers and agencies.

2013 was a year where my focus was split and I was spread thinner than I would have liked.

Most of my time was spent slowly growing Restaurant Engine’s MRR to a point where I was able to phase out my freelance web design contracts.

I also particapted in a partnership that didn’t work out for me, which took a lot of focus and energy. Lots of hard lessons learned.

It was also the year I wrote my first info-product, an eBook called Design for Conversions. That was a fun learning experience and sales did fairly well for a first go at it.

By early 2012, Restaurant Engine was ready to launch to its first paying customers. I learned a lot about doing sales and growing an early customer base on a recurring revenue business. I also learned a ton about the technical side of WordPress.

As a bootstrapped business, I spent more than half my time fulfilling freelance web design contracts. It was a lot of early mornings, late nights, and weekend work, but a lot of fun and lots of learning!

Having discovered Mixergy and other business podcasts, I was excited about the concept of SaaS (software as a service) and decided to try my hand at building one. WordPress was my “bread and butter” so I came up with the concept for a hosted website service built ontop of WordPress—and focused it on a niche: The Restaurant Industry.

I hired a web developer to help me build the back-end and spent way too much time and money than I would have if I were to do it again. But we built it and launched by 2012!

I left my full-time job as a front-end web developer in January 2008—just 10 months before the global financial crisis of 2008. I often look back on this time and feel incredibly lucky that I went out on my own when I did. Had I been employed in November 2008, I bet I would have held onto my job and maybe never would have let it go after that!

These years were primarily consumed doing freelance web design. I grew this to a point where I hired other freelancers and formed small teams to scale up my projects.

By 2009 I start discovering the idea of digital products—specifically it was the WordPress themes market that piqued my interest. I felt that the teams that built WooThemes, ElegantThemes, StudioPress and Press75 had the very same design/dev skills that I had. But they were selling products!

So I launched my first digital products: A WordPress themes shop that I called ThemeJam, along with a specialized WordPress theme for creating a client propsal, called WPBids. Both were a tremendous learning experience and did fairly well as a side-business.

The rest is history…

Still reading? Alright then… Here are some more fun facts:

So that’s my story.

For the 3 of you who are still reading… Hi mom 🙂 and for the other 2 of you, if you’re still curious, ask me anything. 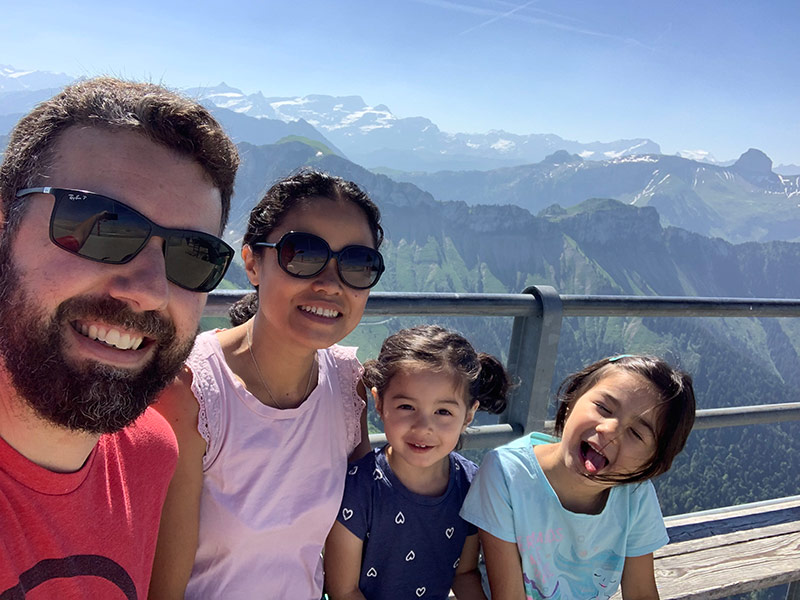 July 2019, our stop in Switzerland on our summer run through Europe 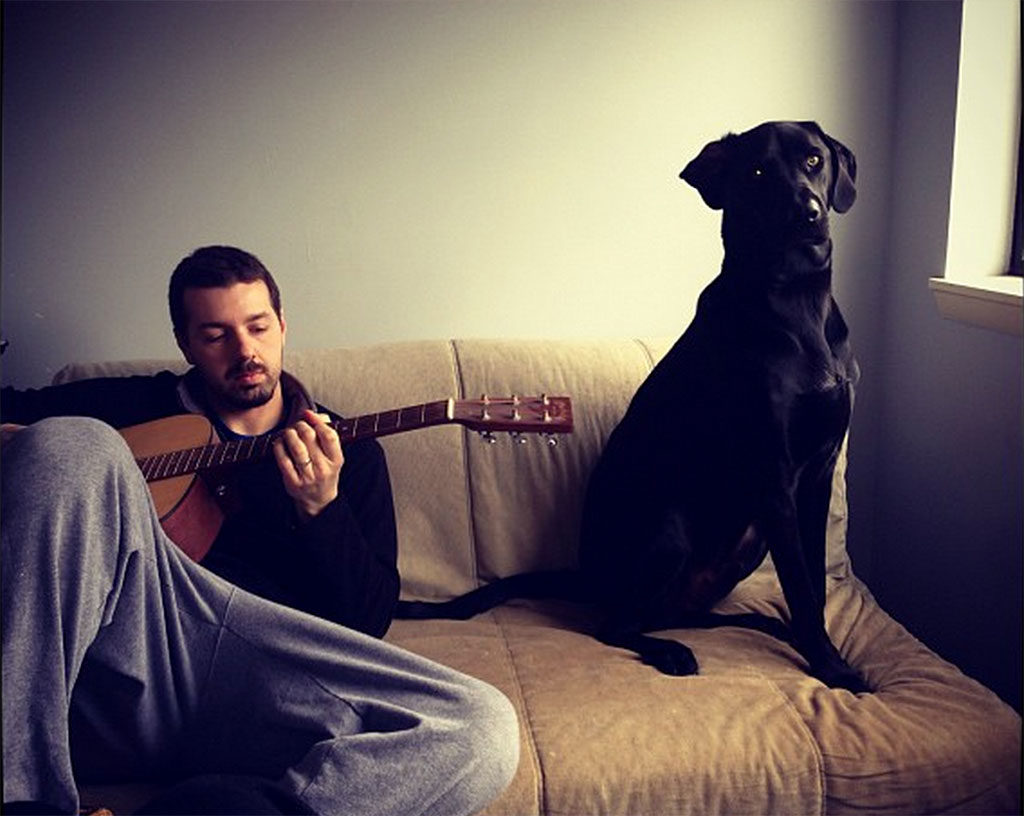